Weeds in the Landscape! 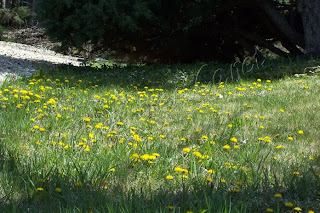 Nothing is more disheartening then seeing your hardwork (or hard earned money) being overrun by malicious uninvited rouge bastards!

What is a Weed?

Now that we have that out of the way, what is a weed? My definition is any plant growing where it is not wanted. The most obvious are yellow dandelions in the green lawn, or bindweeds creeping though your bushes. This year I found a buckthorn growing in my mugo.

If you have a new landscape, unfortunately you will have weeds. It is inevitable that even with the best weed fighting precautions some weeds will emerge the first year. Typically I expect to find weeds exploiting any gap in the weed fabric; at the edger, base of plants, or in the soil that was installed on top of the weed fabric with the mulch (mainly rock mulch). The main thing is to eradicate the weeds before they can get established, as if you can stay on top of them from the start you will never have a weed problem- until they blow in from the neighbors.

Why do they haunt my garden?

Weeds will occur any time the soil has been disturbed. When you think about it you are asking for it. By cultivating the soil for a new garden or new lawn you are improving the conditions for the desired plants; loosening the soil adding nutrients and water, and As it happens this is exactly what the weeds need as well. Left unplanted you will get a bumper crop of weeds in 2-3 weeks.

Where do they come from? 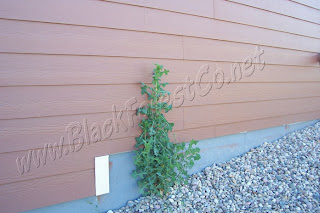 Weeds lie dormant in soil for decades just waiting for the opportunity to see the light of day.

In undisturbed soil the weed seeds at the surface have all ready germinated and been dealt with.

By tilling or digging in the soil all these dormant seeds are brought to the top and given a chance will capitalize on the situation.

How to deal with these demons from the deep?

Best defense is a good offence, you must out compete. By planting your desired plants soon after preparing your soil, they will be using the nutrient before the weeds have a chance to germinate, greatly reducing the number and virility of the invaders.

Hire only the best! 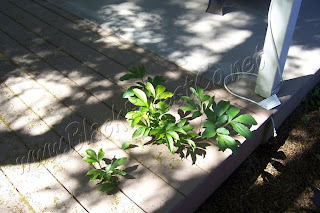 esort. I do have to admit that I keep two chemicals on standby at all times. Round-up™ (Glyphosate) is a must have in my arsenal, it works by being absorbed by only the Green living tissues (and roots) of plants. Most trees and shrubs are protected by their corky bark (leaves are still susceptible), and once dry the chemicals are no longer active. This means you can plant within a few da

ys of spraying. Use Round-up™ to eradicate any green weeds that have sprouted before they have a chance to flower and spread. Also, Very important NOT to use the extended release formulas because they are not as friendly and have a pre-emergent additives. Pre-

shrubs. Being pre-emergent means that it will not harm any plants all ready established, including perennials and annuals but will harm bulbs. These chemicals will typically be effective for 2-3 months.

Now that you are armed (and no longer dangerous), with this new kn

owledge go forth and conquer!

Posted by Black Forest Landscape Design Studio at 9:53 AM